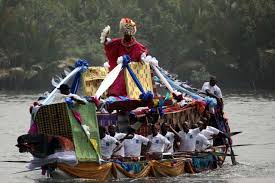 Rivers State was named after the many rivers that border its territory. It was part of the Oil Rivers Protectorate from 1885 till 1893 when it became part of the Niger Coast Protectorate. In 1900 the region was merged with the chartered territories of the Royal Niger Company to form the colony of Southern Nigeria. It was perhaps the richest and most important region of the African zone of the British Empire. The state was created in 1967 with the division of the Eastern Region of Nigeria. Until 1996 Bayelsa State now a state of its own was a part of Rivers state.
Rivers State has maintained its importance as a leading contributor of wealth to the nation for decades and ranked 2nd nationwide with a gross domestic product (GDP) of $21.07 billion and a per capita income of $3,965.00
The state is known for its vast reserves of crude oil, natural gas and other natural resources. Rivers State has two major oil refineries, two major seaports, airports, and various industrial estates. More than 60% of the country’s output of crude oil is produced in the state.

Rivers State governor, Nyesom Ezenwo Wike has unveiled the Golden Jubilee Logo for the celebration of the 50th Anniversary of the creation of the state. Governor Wike declared that the state government will execute a number of landmark projects throughout 2017 to mark the Golden Jubilee and advance the promise of economic independence for Rivers people. The governor said that the creation of the state marked the liberation of the Rivers people from the forces of oppression and domination. He also said over the last 50 years, Rivers State has made significant progress, pointing out the Golden Jubilee Celebration inspires a new direction to build a prosperous state that all Rivers people can be proud of. The governor called on the corporate community and individuals to partner with the Golden Jubilee Committee to make the celebration a success.

This event is an epoch one and it is the first time the state will celebrate its creation in a grand style. The event is expected to attract all sons and daughters of Rivers origin, friends as well as foreigners from all over the world. There will be arrays of cultural display of boat regatta, the famous “Odum” masquerade of Grand Bonny and others from Opobo, Wa-kreka, Kalabari, Ikwerre etc. The event will also feature live musical concerts of local and international stars, street carnival, symposium, quiz competition etc. Indeed it is going to be a global event. The celebrations will hold in May, 2017.
See images of city and rich cultural heritage of Rivers State;